Password managers such as LastPass are designed from the ground up to withstand brute-force attacks on the password database. Using encryption and thousands of hash iterations, the protection is made to slow down access to the encrypted vault that contains all of the user’s stored passwords. In this article, we’ll demonstrate how to unlock LastPass password vault instantly without running a length attack.

Introduced by Marvasol Inc (acquired by LogMeIn) in 2008, LastPass is one of the four most popular password managers. Similar to other password managers, LastPass is designed to store, manage and synchronize passwords, which supposedly helps using complex, unique and non-reusable passwords for the many online accounts without having to memorize all of them.

LastPass offers desktop apps for Windows and macOS, as well as mobile apps for iOS and Android. More interestingly, LastPass can be installed on multiple platforms as a cross-platform browser extension in many popular browsers.

LastPass collects and stores user’s passwords in a local database. The database can be encrypted with a master password. Due to the sensitive nature of the information stored in the password vault, LastPass applies strong encryption and uses multiple rounds of hashing to slow down potential brute-force attacks. Similar to other password managers, LastPass may use different protection settings to protect password vaults on different platforms, desktop apps carrying the strongest protection and Android app using the weakest protection.

Technically speaking, LastPass keeps all passwords along with other authentication credentials in a SQLite database. The database is secured with a password, which, in turn, is used to generate the encryption key after going through some 5,000 to about 100,000 rounds of hashing depending on the platform.

For security reasons, desktop platforms offer the best protection. The LastPass database we obtained from a Windows computer was protected with 100,100 hash iterations. Attacking the database directly would result in the following speeds: 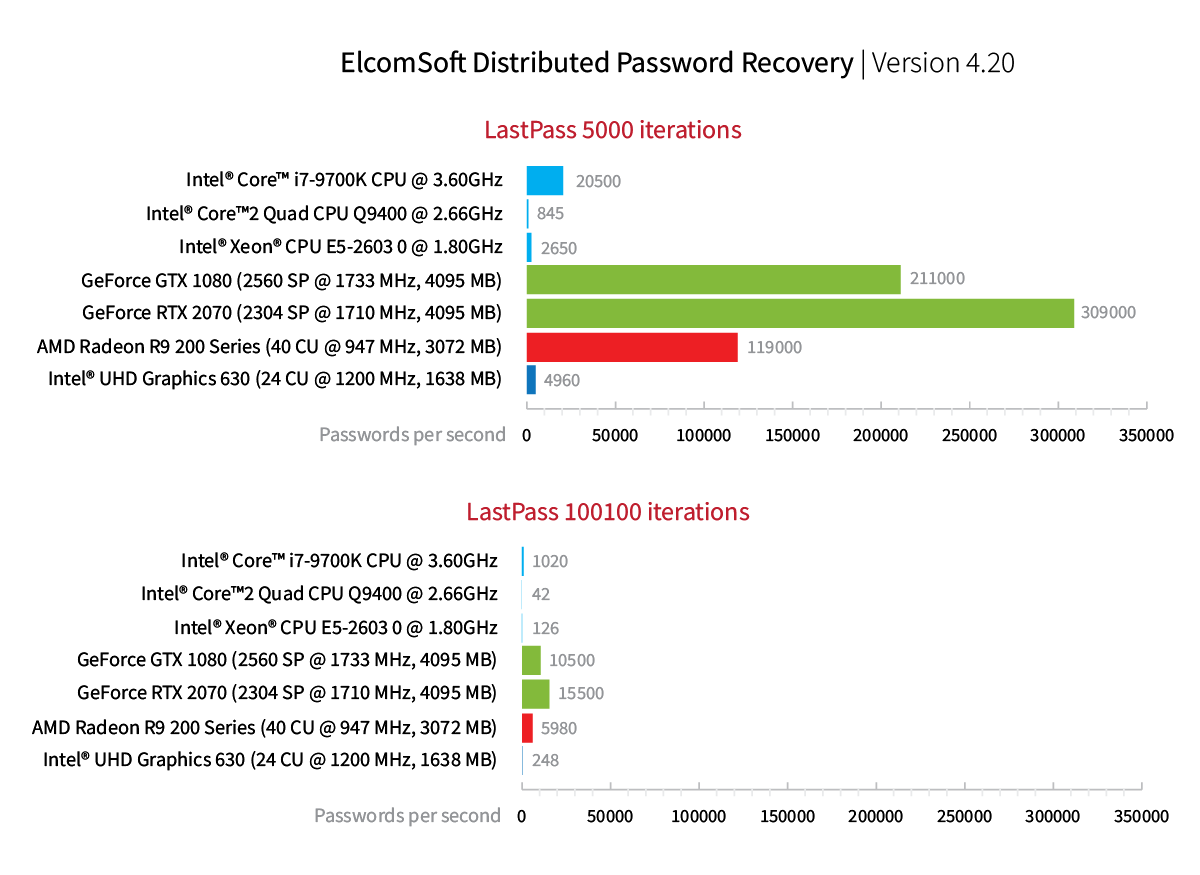 The attack speed of 15,500 passwords per second using a GeForce 2070 GPU is about average, offering reasonable protection of the password database if the user sets a long, complex master password that is not based on combinations of dictionary words.

Since most customers use their mobile devices to access accounts and open documents, LastPass also offers mobile apps on both iOS and Android platforms. The common property of these platforms is the touch screen. Unlike physical keyboards, touch screens don’t have the “motor learning” property; as such, they aren’t the best when it comes to entering long and complex passwords. This results in simpler master passwords selected by users who frequently unlock their protected vaults on mobile devices. While Touch ID or Face ID do help avoid typing in the master password, but authentication with a master password is still required from time to time.

LastPass password databases can be also acquired from Android and iOS devices (file system level access required with unc0ver or rootless extraction). On Android, LastPass uses weaker protection with only 5000 rounds of hashing. Correspondingly, the attack speeds are significantly higher compared to the Windows version – yet obtaining root access or imaging the file system of an Android device may be difficult or impossible.

The brute-force speed of LastPass password databases obtained from Android devices can reach some 309,000 passwords per second if one uses a single NVIDIA GeForce 2070 GPU. We consider this speed relatively high. The attack of 309,000 passwords per second allows recovering complex master passwords in reasonable time. For example, a 7-character password containing some digits, small and capital letters but no special characters (typical for mobile devices) can be recovered in less than three months, while breaking a shorter 6-character password with the same properties can take less than 3 days.

There is, however, one special case where no brute force is required to unlock the protected vault.

LastPass can be installed as an extension in Google Chrome and the new Chromium-based Microsoft Edge browsers.

The browser extension offers what’s arguably the most convenient way to automatically fill passwords on Web pages. Since most passwords protect online resources, many users skip the desktop app and use the Chrome extension exclusively.

LastPass advertises the same level of security for protecting the user’s password database in the Chrome extension:

Only you know your master password, and only you can access your vault. Your master password is never shared with LastPass. That’s why millions of people and businesses trust LastPass to keep their information safe. We protect your data at every step. 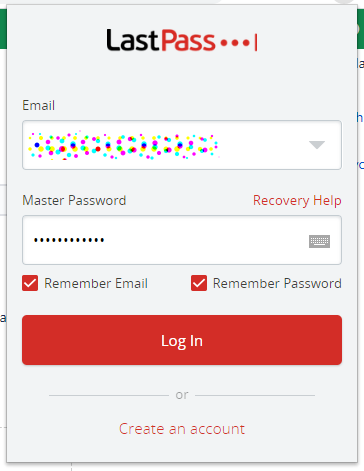 Why use the “Remember password” option? Similar to other password managers, LastPass would otherwise require the user to authenticate each session by typing in their vault password (which, by design, is supposed to be a very long and complex one). Storing the vault password in the vault itself is a natural way to spare the typing. However, it appears that LastPass does not adequately protect the master key if the “Remember password” option is selected:

“The vulnerability (referred to asLastPass-Vul-1) lies in the insecure design of the master password remembering mechanism in LastPass. As shown in Figure 2, LastPass can even remember a user’s master password (with the BCPM username) into a local SQLite [40] database tableLastPassSavedLogins2, allowing the user to be automatically authenticated whenever LastPass is used again.”

This vulnerability is still present in all recent versions of the LastPass Chrome extension (we’ve used LastPass 4.44.0 in Google Chrome 80.0.3987.146 running in Windows 10 x64). As a result, the forensic expert may be able to extract and decrypt the password vault instantly without brute-forcing the master passwords on one condition: the user had selected the “Remember password” check box.

One may argue that extracting passwords stored by the Google Chrome browser is similarly a one-click affair with third-party tools (e.g. Elcomsoft Internet Password Breaker). The difference between Chrome and LastPass password storage is that Chrome makes use of Microsoft’s Data Protection API, while LastPass does not.

Google Chrome does, indeed, store user’s passwords. Similar to third-party password managers, the Windows edition of the Chrome browser encrypts passwords when stored. By default, the encrypted database is not protected with a master password; instead, Chrome employs the Data Protection API (DPAPI) introduced way back in Windows 2000. DPAPI uses AES-256 to encrypt the password data. In order to access passwords, one must sign in with the user’s Windows credentials (authenticating with a login and password, PIN code, or Windows Hello). As a result, Google Chrome password storage has the same level of protection as the user’s Windows login.

This, effectively, enables someone who knows the user’s login and password or hijacks the current session to access the stored passwords. This is exactly what we implemented in Elcomsoft Internet Password Breaker. 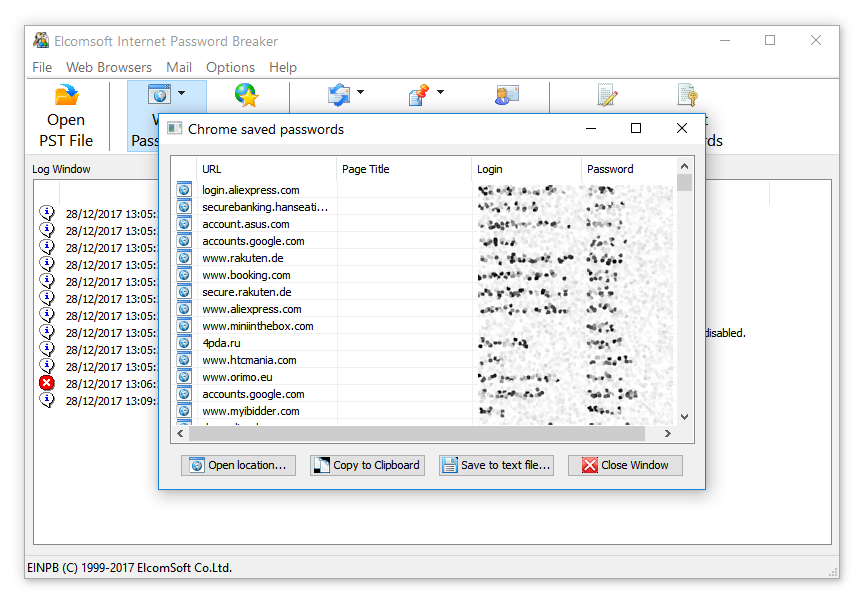 However, in order to extract passwords from Web browsers such as Chrome or Microsoft Edge, one must possess the user’s Windows login and password or hijack an authenticated session. Analyzing a ‘cold’ disk image without knowing the user’s password will not provide access to Chrome or Edge cached passwords.

This is not the case for the LastPass Chrome extension (the desktop app is seemingly not affected). For the LastPass database, the attacker will not need the user’s Windows login credentials of macOS account password. All that’s actually required is the file containing the encrypted password database, which can be easily obtained from the forensic disk image. Neither Windows credentials nor master password are required.

macOS has a built-in secure storage, the so-called keychain. The Mac version of Chrome does not use the native keychain to store the user’s passwords; neither does the iOS version. However, Chrome does store the master password in the corresponding macOS or iOS keychain, effectively providing the same level of protection as the system keychain. Elcomsoft Password Digger can decrypt the macOS keychain provided that the user’s logon credentials (or the separate keychain password) are known. 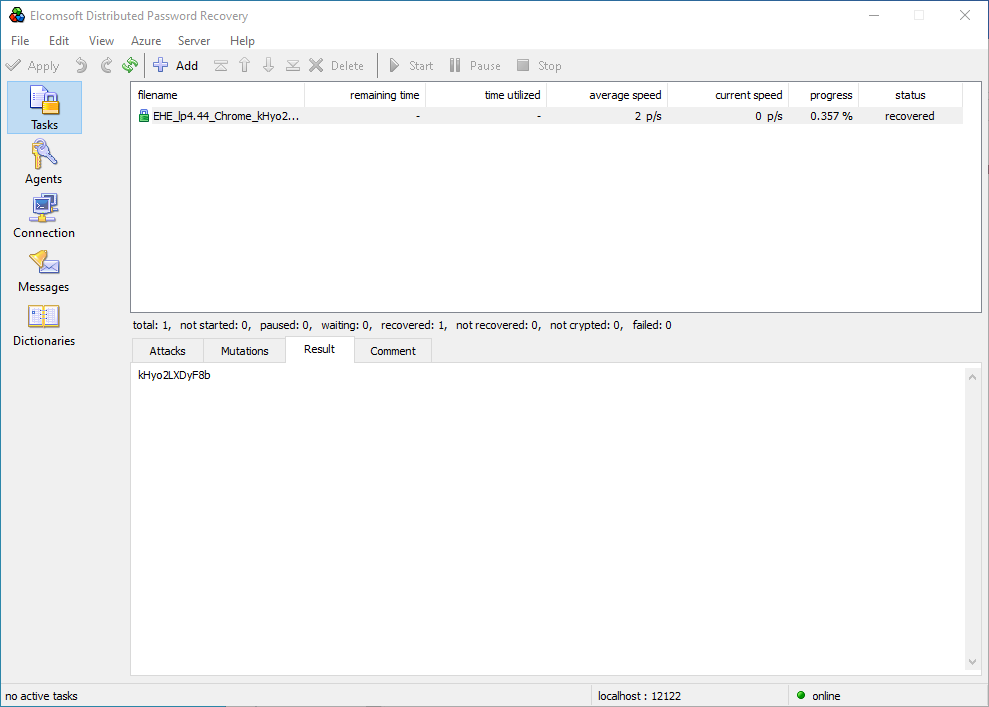 The Worst Mistakes in iOS Forensics

Articles in May Issue of Digital Forensics (4N6) Journal

Registration is free and easy!